To get a better understanding of what interested the class, I made a word map of the most common words used throughout Assignment 1. The larger the word is, the more common it was. I wanted to include this in my assignment to help visualize what everyones thoughts were. 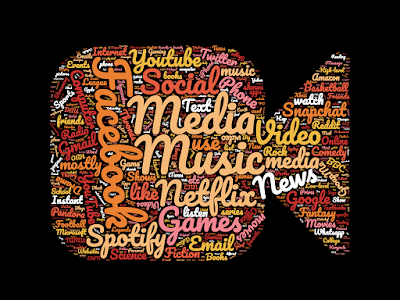 Although everyones wording was slightly different, the majority of people are taking this class the get a better understanding of how media has impacted us and where media is going in the future.

I have broken my main elements of assignment 1 up into the following categories.

Netflix - There were several students who mentioned Netflix on their blogs. Here are a few examples that had Netflix.
Amazon prime - There weren't as many references to Amazon Prime as there were for Netflix, but there were still a few.

Facebook/Twitter/Instagram - Because the social media driven world we live in, most people mentioned something about this.

Music - A lot of people mentioned music in their posts. Most of the students in the class use spotify, but there were some others.

Radio - There weren't too many people that mentioned radio, but there were still some.

Email - Just about everyone mentioned something about Email.

Texting - Almost every blog mentioned something about texting, but here is a specific blog that did.

Groupme/Group messages - I found a blog that mentioned GroupMe.

Posted by Unknown at 8:48 AM No comments:

My name is Thomas Kelm, but most people call me Tom. I'm the one on the right in the picture. JK that is my nephew. We both showed up my family Christmas party wearing the same thing, so naturally he was a little bit confused. * not pictured my light up Captain America shoes* 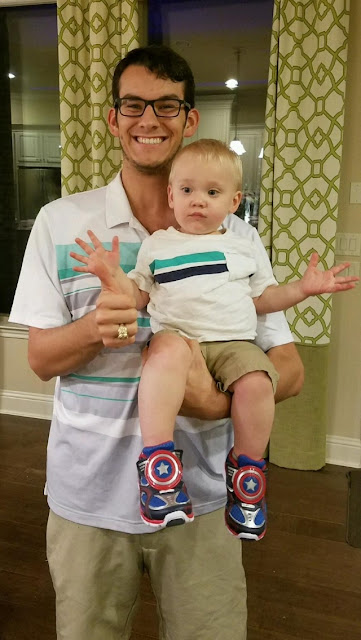 If I had to guess, I would say that collectively I am using some form of media for roughly 4-5 hours per day. I don't necessarily set aside that many hours a day, it depends on what I have going on in my schedule.

Being the poor college students we are, my roommates and I decided to forgo cable tv and just get internet. This means that I don't watch all that much live television, however I watch quite a bit of streaming media. Most recently I have been watching a lot of the Netflix original series. I recently finished Luke Cage and The OA. I have also watched Amazon prime shows as well, like The Man in The High Castle. I guess to generalize what kind of television I watch, it is mostly science fiction shows. I have a saying that I always like to use and it goes a little something like this, "I prefer to watch seasons, not episodes". I almost prefer streaming shows because you don't have to wait until the next week to find out what happens. I have heard the term "binge watch" and I would say that is fairly accurate for me because there have been instances where I have watched 2-3 seasons of a show in the span of a week.

I would say I spend an average of 1-3 hours a day scrolling through all of the social media I use (Facebook, Twitter, and Instagram). I don't evenly portion time for these every day. For example, one day I may be on Facebook for a large majority of my social media time and another day I could be on Twitter. It is mostly decided by what I find interesting at that precise moment.

I really enjoy listening to music, but no genre in particular. I would like to think that I like all kinds of music and it really just depends what kind of mood I'm in or what I am doing. For example, I probably wouldn't listen to rap when I am trying to read or do homework, but I might when I am working out or driving in my car. I don't listen to radio all that often except when I am in the car on short trips (<15 minutes), typically anything longer than that I will play music through my phone. Occasionally I will listen to AM talk radio shows, but usually only if I am wanting something to help clear my head.

I will usually check my email and respond to emails for approximately 30 minutes to an hour every day depending on how many emails I actually received.

Something that consumes more of my day than anything would be instant messaging. I am including texting, GroupMe, and group messages in this category. I will be texting for most of the day because it is something I can do while working on other stuff. I would say I spend roughly 30 minutes looking for memes to post in group messages or looking at the ones my friends sent.

Posted by Unknown at 9:04 PM No comments: